I have been hosting (and attending as a student) two to five tactical training classes a year, every year since 2001. Some of the recent instructors I've hosted are Larry Vickers, Magpul Dynamics, Pat Rogers, LMS Defense, etc. Approximately 70% of those classes that I have hosted over the years have been carbine courses.


In the average carbine course, each student will shoot 1,000 - 2,000 rounds of carbine ammunition. In addition to the training classes that host, I also take other training classes on my own. I have been a full time sworn Law Enforcement Officer for the last 14 years, I've been on the SWAT team for 11 years, and I'm a P.O.S.T. Certified Firearms Instructor for my Agency, SWAT Team, and the Law Enforcement Academy. I also shoot run and gun semi-auto rifle matches (3 yards out to 425 yards), 3 gun, IDPA pistol, all steel pistol matches, and other competition. (I listed the information above to give the reader a frame of reference of my professional and recreational background).


Due to my involvement in the shooting community and information that I write on line, I receive numerous requests for information from shooters who are confused as to which AR15 to buy for recreational use, personal defense, training classes, law enforcement duty, or competiton use.


Because of the number of different AR15 manufacturers currently available, selecting which company to go with can be confusing and intimidating. One of the best references I have found to show someone cost vs. features of different AR15 carbines is Rob Sloyer's M4 Comparison Chart, M4 Specs Chart, and M4 Chart Explanation of Features. At the bottom of each column of features is the retail price of each carbine. 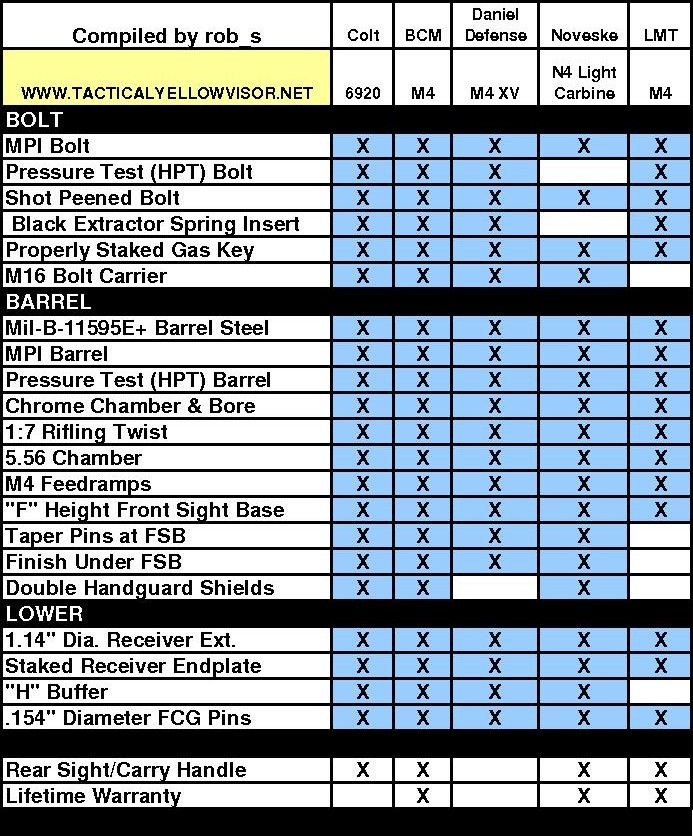 Click on this link to see a complete version of the: M4 Comparison Chart 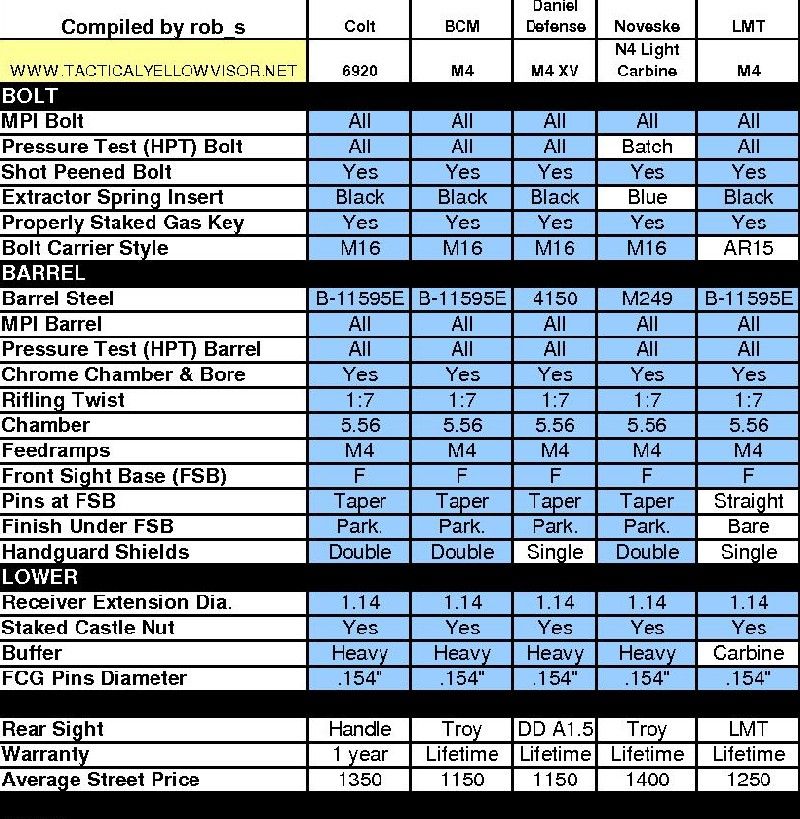 Click on this link to see a complete version of the: M4 Specs Chart

The M4 Comparison Chart, M4 Specs Chart, and M4 Chart Explanation of Features are the property of Rob Sloyer at www.tacticalyellowvisor.net, used with permission.


As you can see from the M4 Specs and Comparison charts features and prices differ greatly from one manufacturer to the next. From what I have seen over the years from training classes, competition, work, etc. these features can have a direct effect as to how reliable a carbine is, especially over a long period of time.


In August of 2008 I received a BCM (Bravo Company Manufacturing) (Bravo Company USA is the retail outlet for BCM) complete 16" mid-length carbine upper receiver with BCM bolt carrier group and charging handle. What follows are my (and other shooter's) experiences with BCM's (Bravo Company Manufacturing) uppers and lower receivers, along with a detailed list of features (including pics), and why I recommend BCM carbines to recreational shooters, students who will be attending tactical training classes, other law enforcement officers, and competition shooters. 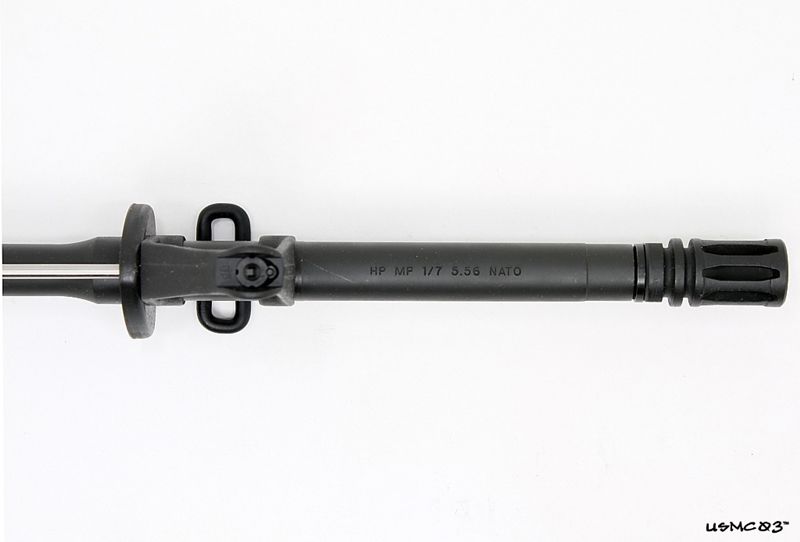 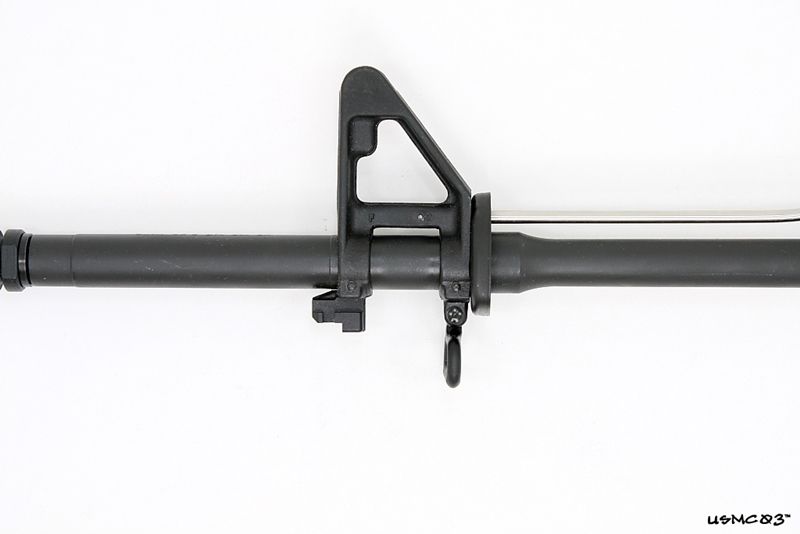 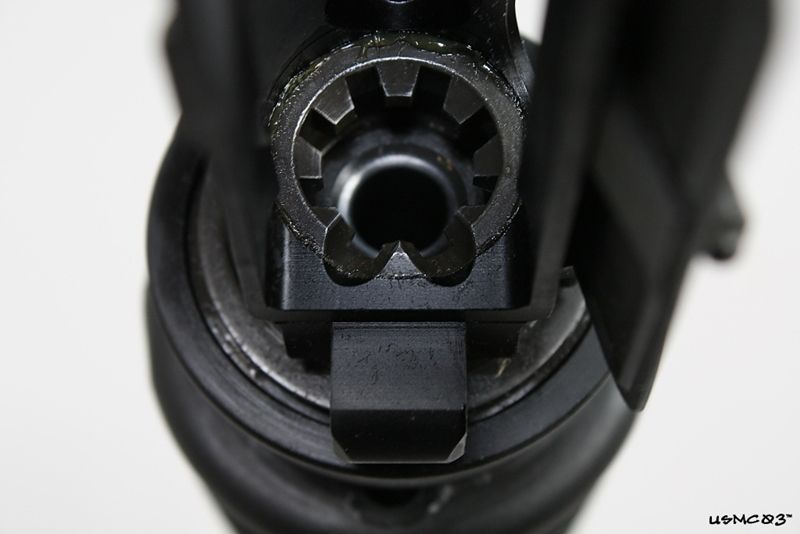 Right side of the BCM upper receiver: 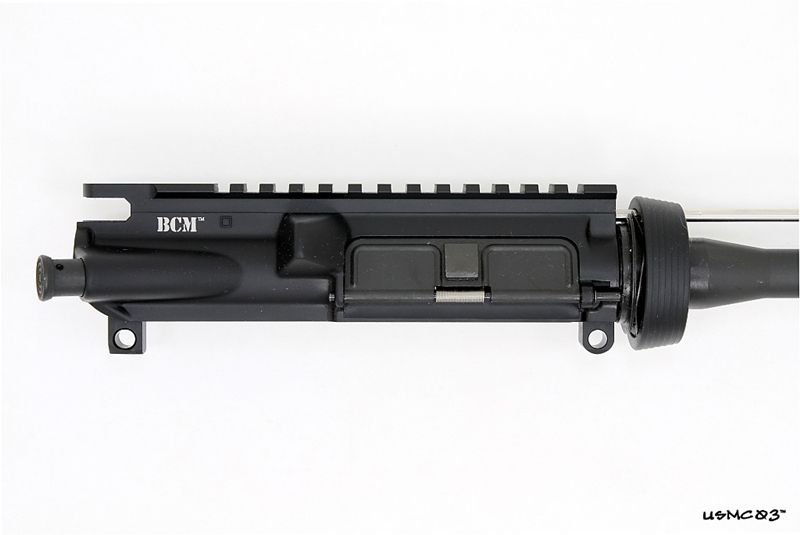 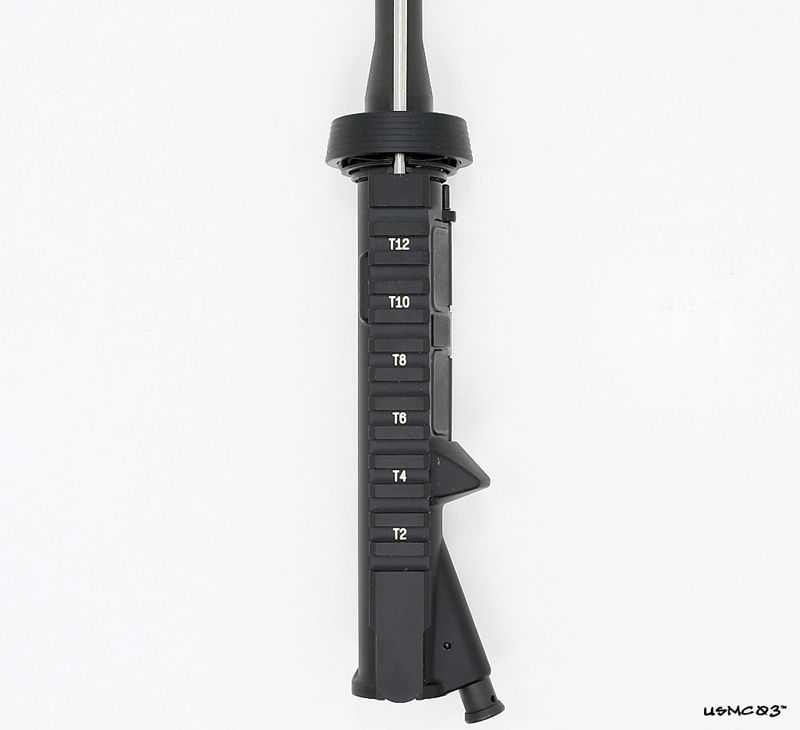 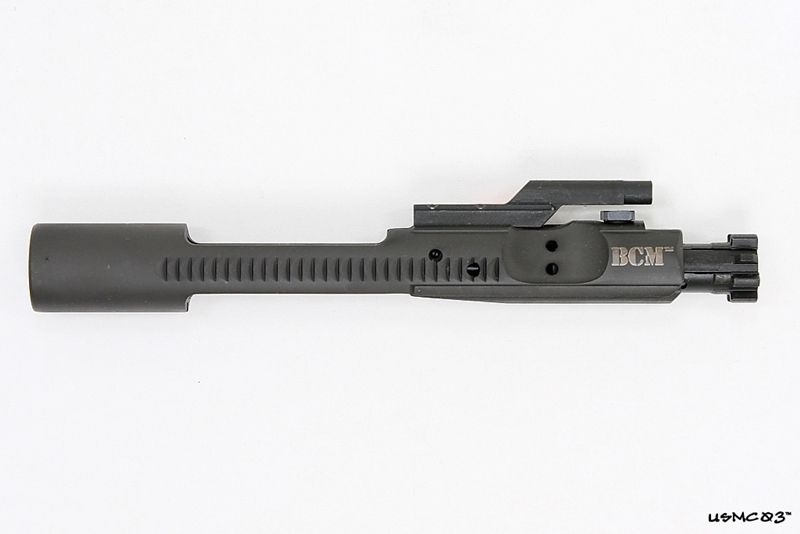 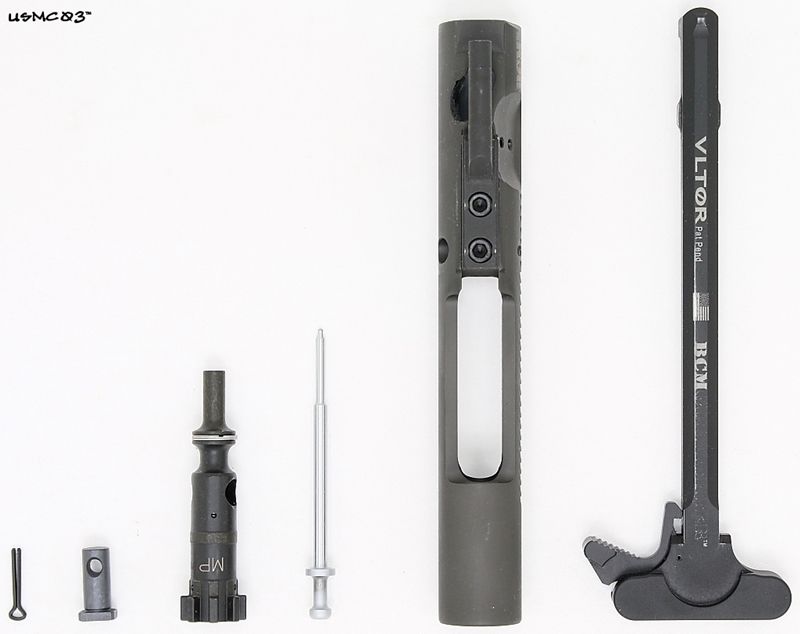 -Low Shelf for Accuwedge use

-Un-notched Hammer compatible with 9mm use 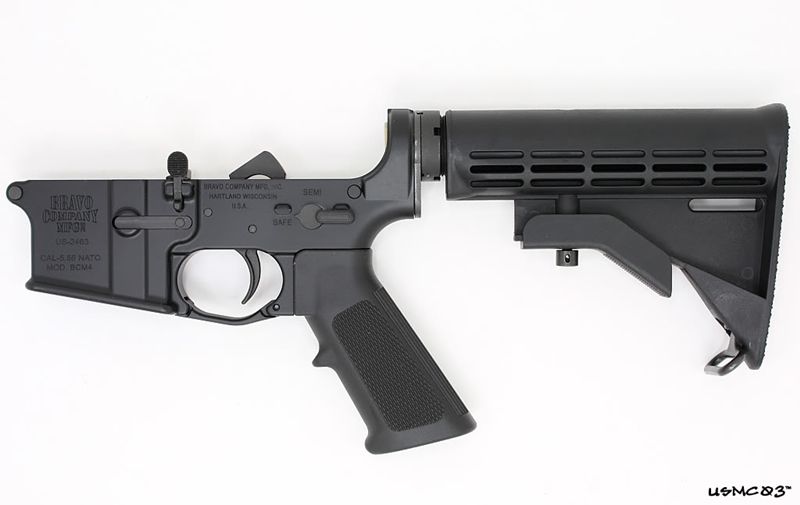 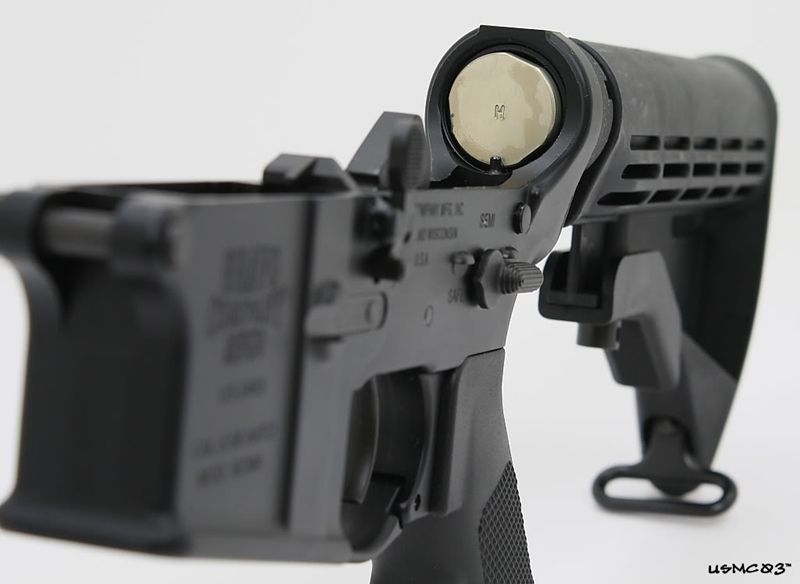 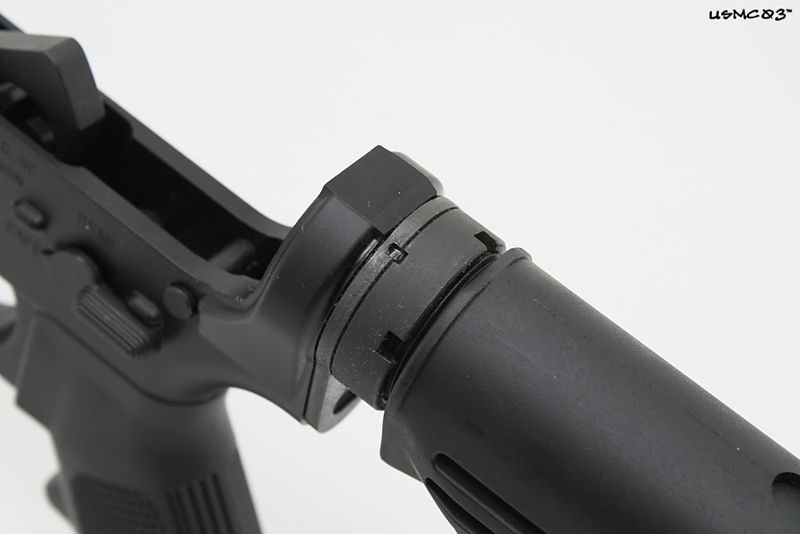 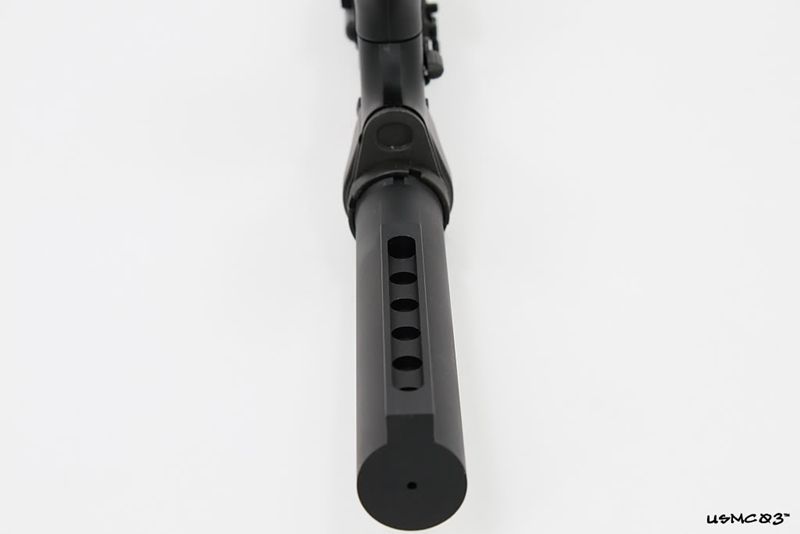 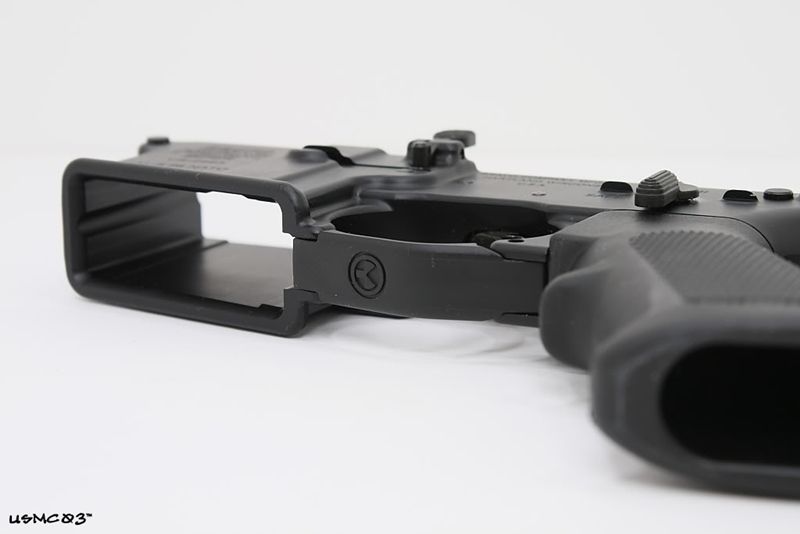 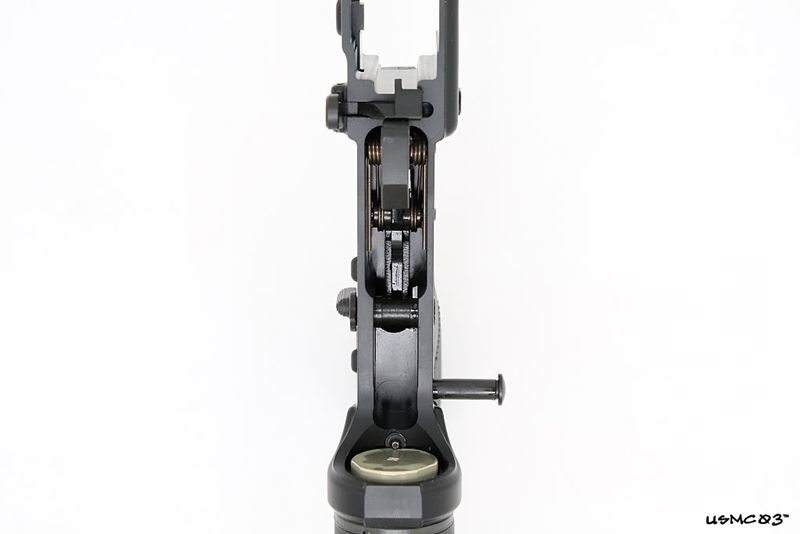 Inside the BCM Lower Receiver (angled view to show the Low Shelf for Accuwedge use and RDIAS installation): 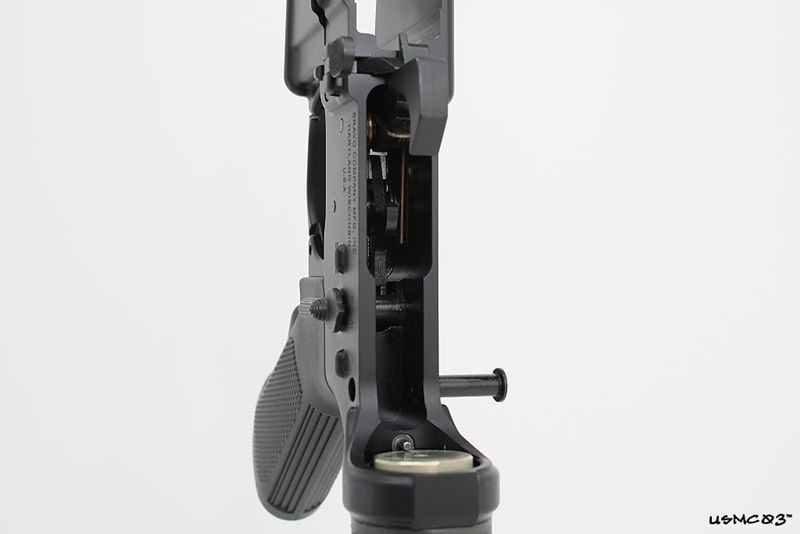 In May of 2009 I hosted Pat Rogers for a three day EAG Tactical Carbine Operators Course. A few pics from that course: 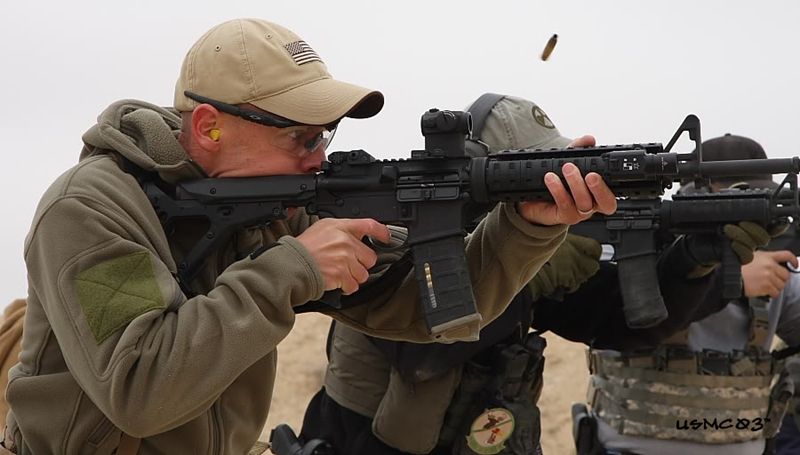 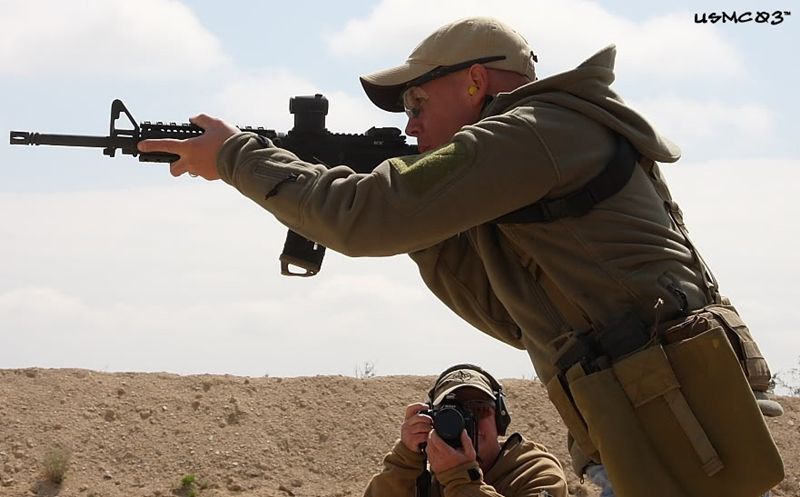 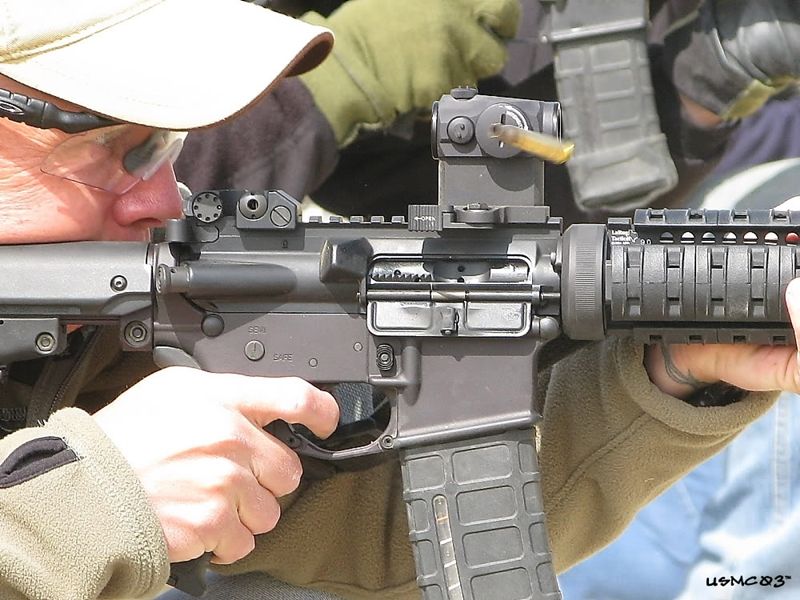 We had a good showing of BCM uppers and complete guns in the class. I talked with all of the guys that were running BCM uppers / guns and no one had a single malfunction that was caused by the carbine. Almost 1/3 of the students in this course were running BCM guns. 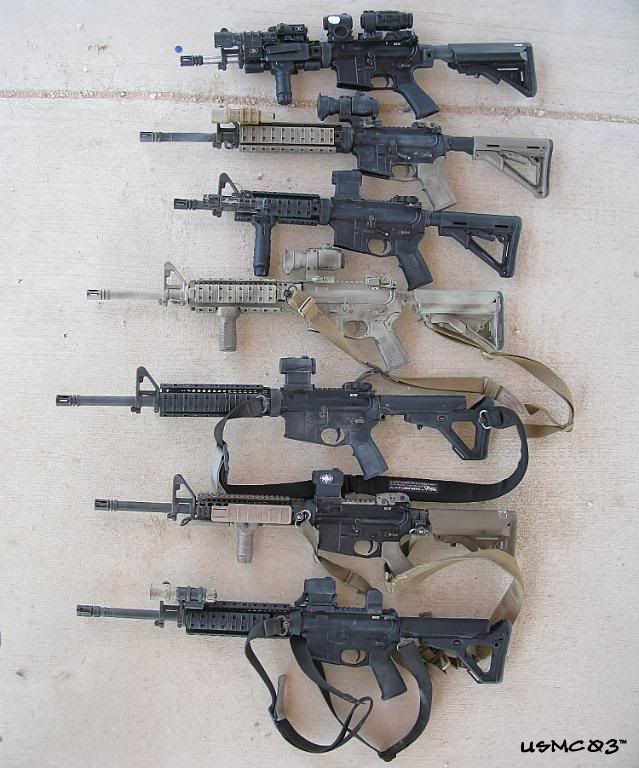 Each student put just over 1,300 rounds through their gun in the 3 day course. Not a single problem of any kind. At the end of this class, Pat Rogers' test and eval BCM 16" Mid-Length carbine had 13,600 rounds through it. Pat's test and eval BCM 16" Mid-Length is one of several guns that get's lent out to students during classes.


In September of 2009 I hosted a two day LMS Defense Carbine Course. During this course I lent the BCM 16" Mid-Length that I had used in Pat Rogers' class in May to another student who had traveled from out of state to attend the class. The student used polymer cased Wolf ammo the entire class. I shot a BCM 16" mid-length with BFH barrel.

During the LMS Defense Carbine Course 5 out of 8 shooters were running BCM uppers or complete guns (to include a BCM 11.5" BFH and a BCM 16" BFH). No malfunctions in any of the BCM guns (with the exception of a Wolf casing getting stuck inside the chamber on the 2nd to the last drill at the end of training day 2. I thought we were going to break the Magpul CTR stock and BCM Gunfighter charging handle trying to get the stuck case out of the chamber, but we were finally able to free the spent casing with no damage to either the stock or charging handle. This problem happens from time to time with Wolf ammo, it's an ammo related issue, and is not a carbine reliability issue. During this course each student shot approximately just over 1,000 rounds of .223 ammo through their carbine.

Close up shot of another student using my BCM 16" mid-length. 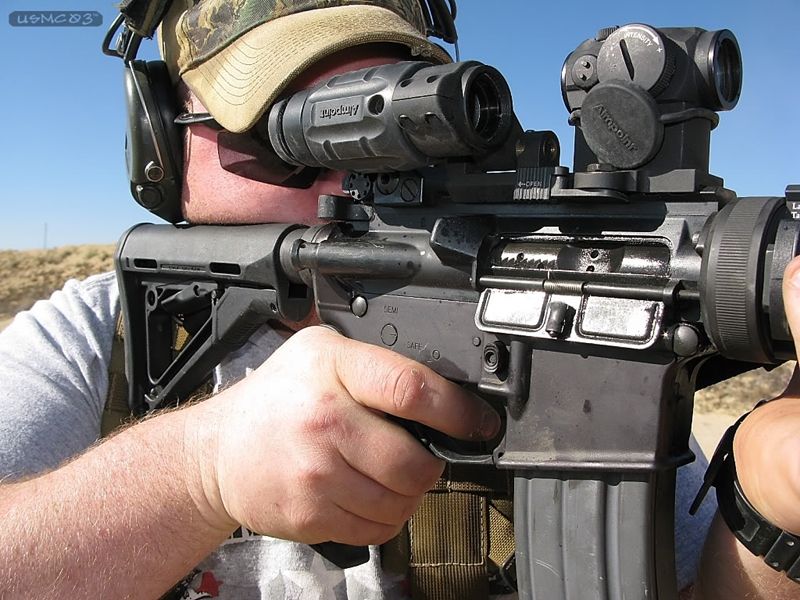 Another shot of the same student and same BCM carbine: 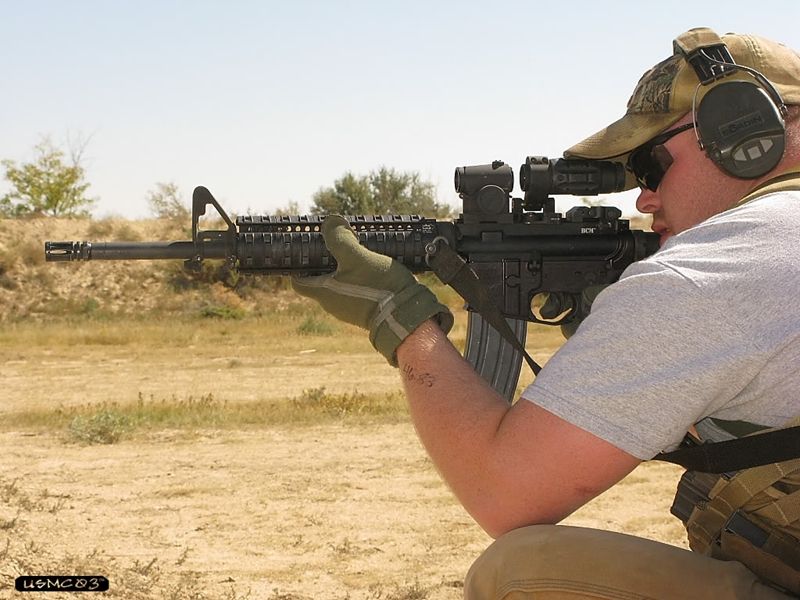 A group shot of students who were running BCM carbines in this course: 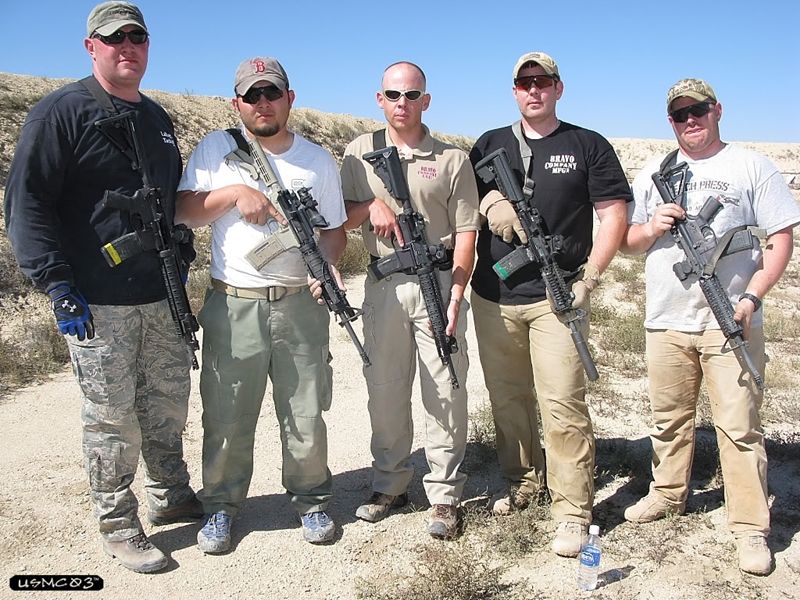 I also shot a BCM Stainless Steel SS410 16" mid-length barrel as my run and gun competition rifle. Our local monthly run and gun rifle match is from 3 yards out to 425 yards. Some pics from those matches: 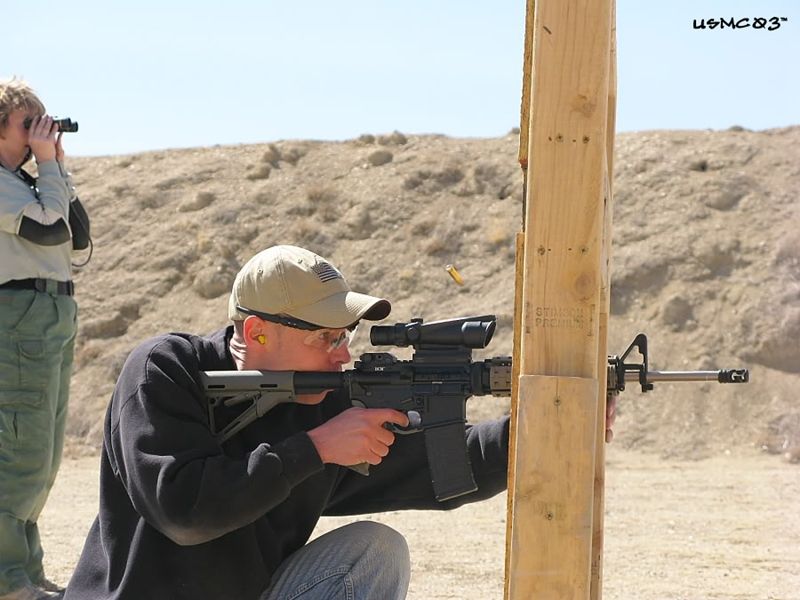 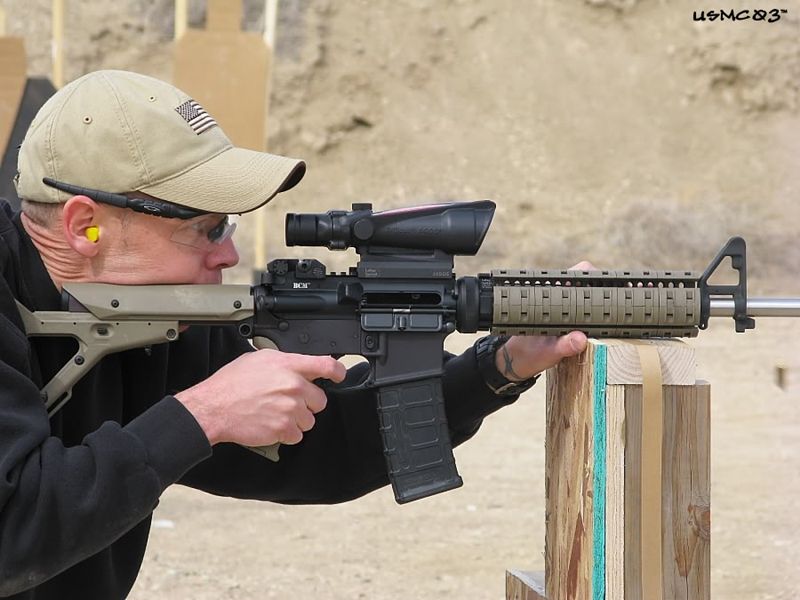 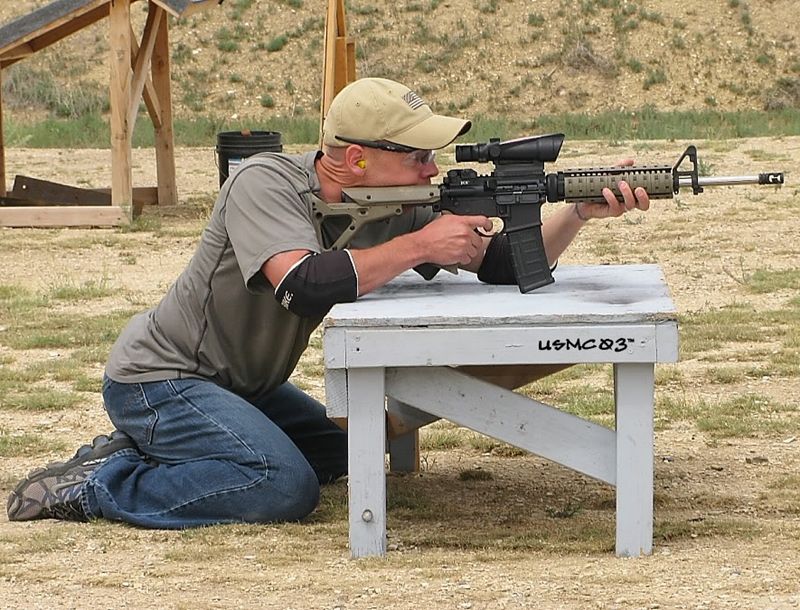 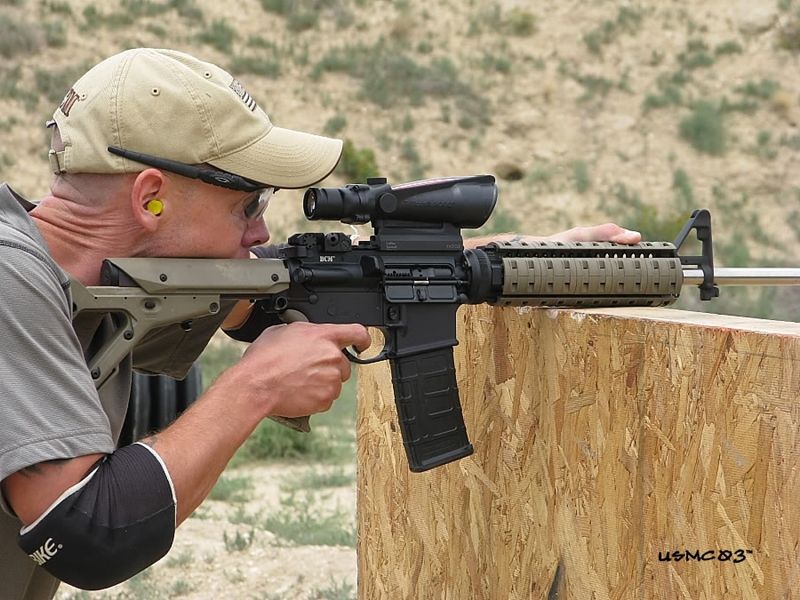 On 12-24-09 I contacted Pat Rogers to see what the current round count of the BCM 16" Mid-Length that he has been loaning out to students. Pat refers to this BCM Mid-Length as "Filthy 14" and provided me with the following information on this gun:

-At 26,450 rds had 3 failures to extract. Replaced BCG and cleaned gun for the first time

**All of the rounds were fired during class (at the rate of approximately 1,250 rounds every 3 days)**

I do not recommend allowing the gun to go this long without PM (preventive maintenance). However, we wanted to see how far we could take this particular gun (#14) without being burdened by the myth of meticulous cleaning."

Keep in mind the punishment that Pat Rogers' BCM mid-length has been put through. The gun is being shot approximately 8 hours a day in a tactical training class environment at the rate of approximately 1,250 rounds every 3 days. Very few people have the time, money, or effort to run a gun like that for 28,905 rounds. This upper has the standard barrel, not the new BFH (cold hammer forged) barrel.


There are a couple ways to purchase a complete BCM carbine. You order from a dealer like (complete list can be seen here: List of BCM dealers) for approximately $1,150

If money is an issue and you want a quality carbine you can order the upper and lower directly from Bravo Company USA separately. A complete upper is $475 and if you order the bolt carrier and charging handle at the same time as you order your upper the cost is $145. Plastic handguards are $20. Total cost is $640 plus shipping. The complete upper, bolt carrier group, charging handle, and handguards can be shipped to your residence. As funds become available you can order a complete lower, which costs $350. The lower receiver has to be sent to a FFL (Federal Firearms License) dealer. Complete gun for $990. Looks exactly like this (minus the LaRue Tactical rear back up iron sight): 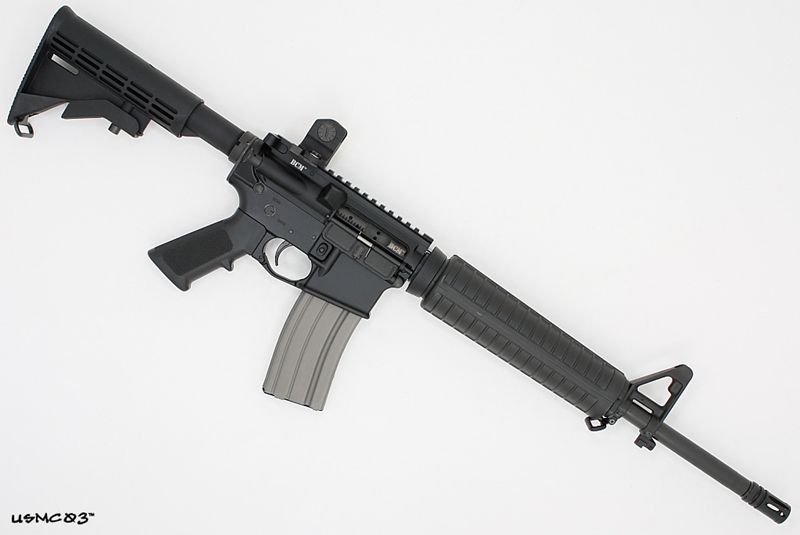 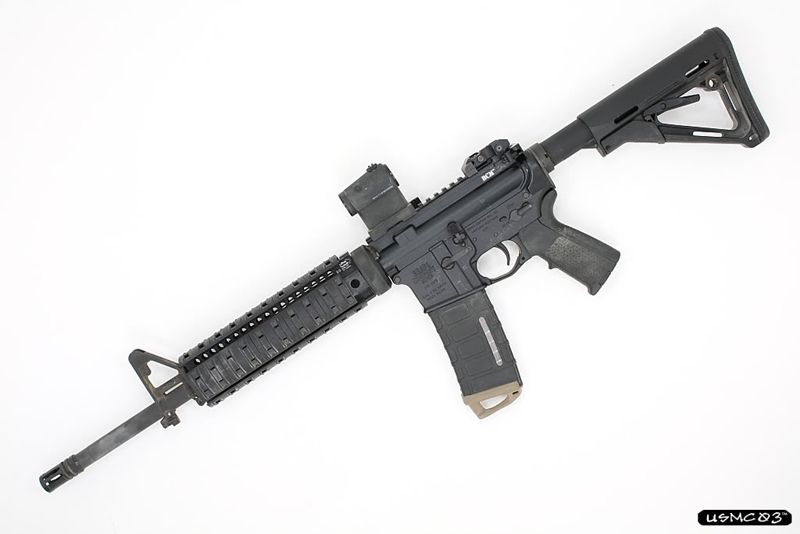